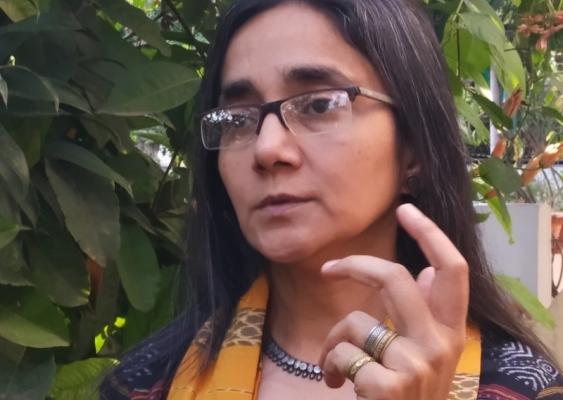 Rajula grew up in Madhya Pradesh, India learning to make things with tribal/ folk craftsmen, listening to their stories and later studied filmmaking at the Film & TV Institute, Pune. Her work is located in the interstice of Poetry, Art, Cinema, Anthropology. A keen interest in the indigenous knowledge systems, the performers, practitioners and the changing practices thereof, form the core of her practice; emerging through a close collaboration with people, their individual histories and environments.

She has been producing/ directing / writing/ editing & photographing films for close to two decades and continues to explore boundaries of fiction/non-fiction, art, new media et al.

Her films have screened widely in festivals, museums and across Academic/ Art contexts, earning critical acclaim. Among significant awards are the Horizonte Preis at Dokfest Munich, Germany for Word within the word 2008; Signs Special Jury award for Beyond the wheel 2005, John Abraham National Award for Best Experimental film 2013 first for ReTold by Loknath & second time for the short fiction Jumbled Cans in 2014.

She writes fiction and poetry. Her poetry collection in Hindi Parchhain ki Khirki se was awarded for best New Writing, by Bharatiya Gyanpeeth in 2004; Among her translations into Hindi, the eminent social scientist Ela Bhatt’s ‘We are poor but so many’ and selected letters of Vincent Van Gogh ‘Mujh par Bharosa Rakhna’ are prominent.

She has been on Juries for National and International Film Awards, on panels for seminars, talks and conferences for Cinema and continues to coach young filmmakers, film buffs & film critics in various Film & Media schools including alma mater Film & Television Institute of India, Pune.